This Domestic Violence Awareness Month, the TOD@S Collaborative is broadening our public understanding of what intimate partner violence is and who it impacts, while also depicting, promoting, and celebrating healthy relationships among queer and trans people of color.

And they’re doing all of this in six simple (and amazing!) ads. 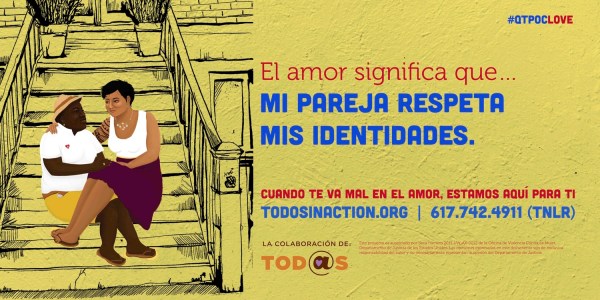 The “Celebrating #QTPOCLove” campaign highlights healthy relationships among queer/trans people of color (QTPOC)—using the tagline “Love means…” (in English and Spanish) in a series of original images. The campaign does the additional work of supporting the survivors often ignored in mainstream campaigns against partner abuse and gender-based violence. It connects victims to resources, including include a 24-hour hotline number—617-742-4911—for individuals to call “when love goes wrong.”

If you’re so lucky to be in Boston, the series of six ads will be featured on the bus and transit system in the city, as well as local print, social media, and digital outlets in the area. If you’re like me and live in the city where metro ads are boring or offensive, hop onto Twitter where the campaign is inviting folks within QTPOC communities to share their own depictions and definitions of loving relationships with the hashtag #QTPOCLove. 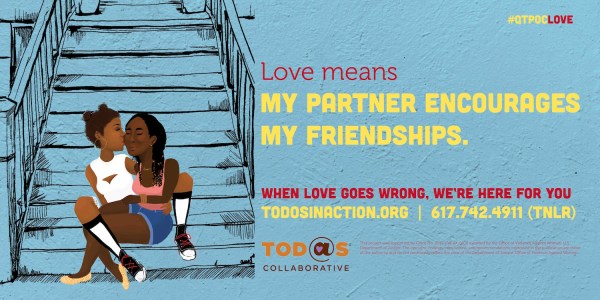 The TOD@S Collaborative is a collaboration among the Hispanic Black Gay Coalition, The Network / La Red, Renewal House Shelter, and The Violence Recovery Program at Fenway Health, who work together to increase access to intervention and prevention services for QTPOC affected by partner abuse and domestic violence.

Mahroh is a community organizer and law student who believes in building a world where black and brown women and our communities are able to live free of violence. Prior to law school, Mahroh was the Executive Director of Know Your IX, a national survivor- and youth-led organization empowering students to end gender violence and a junior fellow at the Carnegie Endowment for International Peace. Her research addresses the ways militarization, racism, and sexual violence impact communities of color transnationally.

Mahroh is currently at Harvard Law School, organizing against state and gender-based violence.