Christopher Nolan Fans: BEWARE! You may not like what follows. It’s not my business to please you. This is a feminist critique of superhero films that stereotype female characters terribly.

Understand? Terribly. Nolan’s track record (Inception, Batman trilogy etc.) almost always produces a commercial successes, but if you dig deeper, like I always do, you will find badly sketched female characters. Wait, not even sketched. Just doodled. His team of writers have just made doodles of Catwoman, Rachel and Talia. Now I hear you frantic movie-goers going, “Aah! Just just watch the movie for what it is. Don’t read between the lines.” I cannot. I have to read what’s between the lines. Because what’s between them is a representation of how society views women. And then how these writers doodle them on a piece of paper. And then the piece of paper gets a screenplay and becomes a movie. And then that movie is watched by millions, reinforcing patriarchal norms. And it’s drilled into their subconscious. That’s what I wouldn’t want — to consciously remain in my subconscious. I want to write the thoughts that are ignored.

(1) Women have been fridged. They suffer from “Women in Refrigerator syndrome.” Meaning, a woman needs to be cut, killed, kidnapped, tortured, or raped in order to give angst to the hero to fulfill his ‘destiny.’ So the woman, in herself, does not represent a purpose. She needs to be used or sacrificed by the comic book writers in order to give depth, revenge, or angst to the superhero. Now if a woman is giving up her life for a cause she believes in, then it’s not the refrigerator syndrome — there is still a purpose for her there; she is independent and able enough to occupy herself in life besides her love interest. But if acts of violence are carried out against a woman, then it’s typically refrigerator syndrome. For example, Rachel Dawes is killed by the Joker in The Dark Knight — so Nolan essentially creates a character, develops a relationship between her and Batman, only to… You guessed it: get her killed by a maniac. (Read more about “Women in Refrigerator Syndrome” here.)

She is also a perpetual damsel in distress. In Batman Begins, she is rescued (ugh) by Batman three times from Doctor Crane/Scarecrow. “Damsel in distress” originated in ancient times in France’s folkore and Britain’s literature. It’s not related to morality. In any which way. It’s related to how people, men and women alike, have a fetish to see something “weaker” than them in distress. It establishes a power struggle. I really want to get into Foucalt here, but I cannot. Too many tangents.

(2) Catwoman. Before we move to the movie portrayal by Anne Hathaway, I was intrigued by why a woman was modeled entirely on a cat. I wanted to understand the thinking of the man who created her. Her character predates Wonder Woman’s — so she was made in 1930-40s — and I wanted a logical explanation from Bob Kane (who also happened to create Batman). But wanting an explanation was probably the worst thing, because I found out the rubbish behind why Catwoman was who she is. According to Bob Kane,

“I felt that women were feline creatures and men were more like dogs. While dogs are faithful and friendly, cats are cool, detached, and unreliable. I felt much warmer with dogs around me — cats are as hard to understand as women are. Men feel more sure of themselves with a male friend than a woman. You always need to keep women at arm’s length. We don’t want anyone taking over our souls, and women have a habit of doing that. So there’s a love-resentment thing with women. I guess women will feel that I’m being chauvinistic to speak this way, but I do feel that I’ve had better relationships with male friends than women. With women, once the romance is over, somehow they never remain my friends.”

Excuse me, Bob? As a woman, can I risk my passivity and ask you why you think men are like dogs and women are like cats? Also, notice how he assigns all the “positive” traits (loyalty, friendliness, etc.) to men/dogs and other “negative” traits (detached, unreliable, etc.) to women/cats.

Image via Rope of Silicon

Now, coming to Nolan’s Catwoman. Issues I have: Objectification, first. Defending herself in 6-inch heels, second. This promotional cover, third.

Does the male gaze theory in cinematic studies help us understand something? Yes, it does. 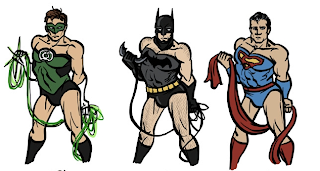 “The Male Gaze is a Feminist theory that was first developed by Laura Mulvey in 1975. The male gaze occurs when the audience, or viewer, is put into the perspective of a heterosexual male. Mulvey stressed that the dominant male gaze in mainstream Hollywood films reflects and satisfies the male unconscious: most filmmakers are male, thus the voyeuristic gaze of the camera is male; male characters in the film’s narratives make women the objects of their gaze; and inevitably, the spectator’s gaze reflects the voyeuristic male gazes of the camera and the male actors.”

So my point is, if a woman can be subjected to male gaze, let’s find a solution. A solution that reeks of equality. Let’s subject the hero to something similar (I think my point is pretty obvious)… 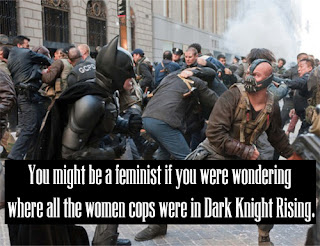 There are no fat women, there are no female cops, and there are no black women (except one). There is a scene where literally all male cops are fighting against Bane’s organization, and I am just staring because for ten minutes there is not a single woman in the frame, not a single female cop — despite the fact that women represent more than half the population in real life.

Header image credit: You Might Be A Feminist If…/Tumblr