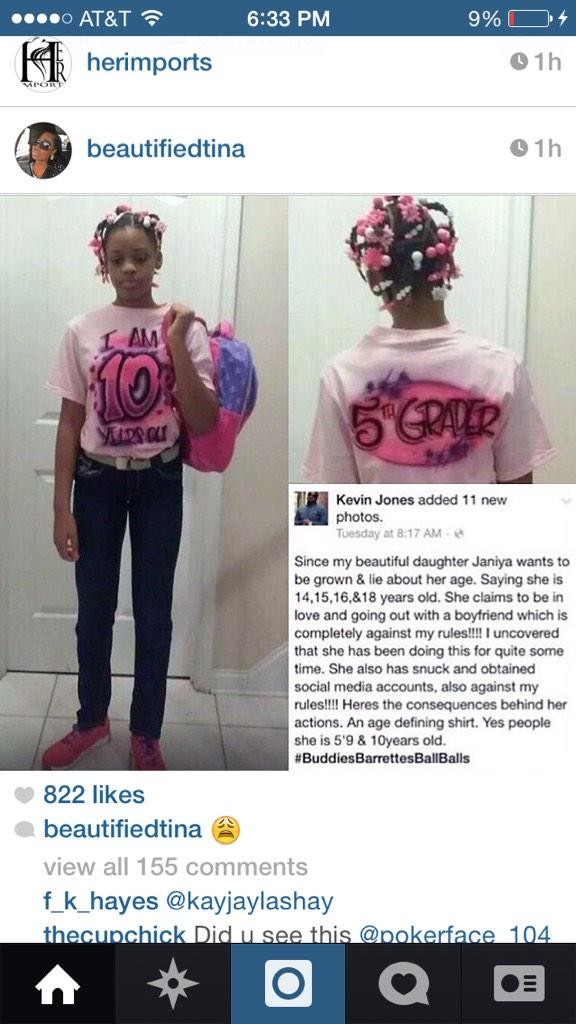 This week, ever vigilant “Feminist Twitter” has been abuzz about a black father in Louisville, Kentucky who posted these photos (and caption) of his daughter after he found out that she had broken several of his house rules. The critique and skepticism of this man’s form of discipline have ranged from claiming it was unnecessary and counterproductive in the face of the “real” issues that this girl must have, to calling it slut-shaming and emotionally abusive. The general sentiment seems to be that posting pictures of his daughter online invokes a disciplinary tradition of humiliation that can only be harmful. How I do I feel about it? Well, my personal opinion is that: it ain’t that deep.

I think that what we have here is a 10-year-old girl — an age which falls into that precarious developmental stage between “my concept of reality could still potentially involve imaginary beings” and “I’m so close to tasting the full freedom that is being a teenager, even though I still kind of need an adult to support me in just about every way possible” — who lives in the digital age. Digital spaces come with the glittery promise of some form of privacy and autonomy (things that are definitely missing from a 10 year old’s life) that is offered when you create an online self. For my generation, it was going into chat rooms using someone else’s parents barely-there dial up connection, or in most cases, sneaking on the party line. And I’ll be clear, my friends and my experiences there involved a substantial amount of lying about our age — mainly to meet the minimum age requirements to use the service — and well-rehearsed stories about our glamorous and fake teenaged lives to back it up. No, we weren’t acting out some other, deeper trauma that had us crying out for love and affection. We had simply reached the age where we were interested in boys, especially older boys, and we didn’t think being 10 or 11 was going to help us in our cause.

But that’s not an excuse for us breaking our parents’ rules, nor is it in Janiya’s case. She absolutely deserved some form of punishment for what she did. And I think her dad’s version fit the bill. He wanted the people that she was interacting with to know her real age, so he dressed her age appropriately in a t-shirt that revealed the facts. Doing it on social media wasn’t a humiliation tactic–it was public accountability. More than keeping his daughter safe, he was forcing her to be honest. It’s also worth noting here that when you’re 10, almost every disciplinary incident prompts an emotional reaction, and a lot of times it’s humiliation. When I was 10, my Granny and I went into Best Buy. She publicly refused to buy me Usher’s My Way album because it had an explicit content warning. I made quickly forgotten plans to run away. See how that works? And it’s not slut shaming to have age requirements regarding when your daughter can date. Even though some parents use these age requirements as a way enforce shaming and buy into the purity myth, there is no evidence here to suggest that’s what Kevin’s aim was. His messaging was: “My daughter is on social media, lying about her age, and claiming to be dating. All of these things are against the rules that I’ve set for her and I would like to let people know that since I can’t trust my daughter to do so.” He didn’t say: “My daughter is being disrespectful because she’s interested in boys and I want to show the world how young and unsexy she is so that no one will ever date her.” In the midst of people posting videos of them beating their daughters for twerking and young black girls being called “thots” all over the web for dressing a certain way, I can understand the sensitivity when we see black girl’s transgressions being put on public display. But sometimes, and Janiya’s situation is a great example, it just ain’t that deep.

In our never-ending quest for a perfect feminism, we sometimes forget that everything that isn’t feminist isn’t necessarily sexist, or even anti-feminist. And sometimes we really do need to be reminded that things really aren’t that deep. Kara Brown just recently addressed this at Jezebel about an over analysis of the term “basic”. Kara awesomely articulated that “basic,” a term frequently deployed by people of color, really ain’t that deep. And I wish that someone would have shared the memo with Annie Lennox before she went on her little tirade about Beyonce and how she dances. She would have realized that twerking is a fun cultural practice, and it ain’t that deep.

On so many occasions I find myself closing my laptop in exasperation trying to find an entry point into a conversation that I don’t actually care about. I see how we can get caught up in the rapture of miniscule moments in human history. Especially as so many amazing feminists writers, commentators, hashtag activists, and (social) media personalities feel pressure to have an opinion on everything in order to stay ahead of the curve in this age of information-at-the-speed-of-light. But in doing so, we make assumptions, impose tropes, and introduce connotations to situations where they may not exist.

I implore us moving forward: The next time you see a white girl wearing cornrows (not in blackface, though, because that deserves addressing), or hear about a guy saying that he prefers to date women with long hair as opposed to those with short hair (as long as he doesn’t attack short-haired women because that deserves addressing) and you feel compelled to write a think piece or start a twitter campaign or even just lament about how anti-feminist and harmful it is, stop for a moment. Ask yourself, “Is this really a big deal?” Chances are, it ain’t that deep.