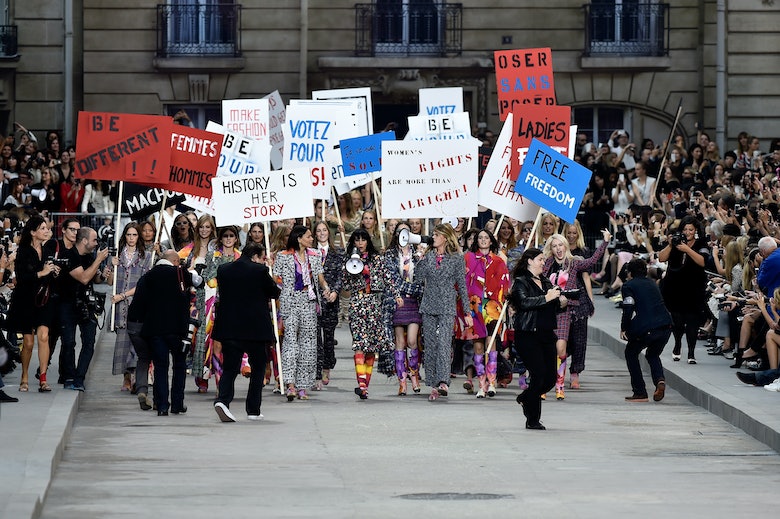 Paris Fashion Week events aren’t the traditional “stuff” that makes feminist news. But last week, Chanel had feminism at the forefront of everyone’s mind. Under the leadership of designer Karl Lagerfeld, the grand finale of Chanel’s runway show was a recreated 1960s-style feminist rally, complete with picket signs and blow horns. The feminist fashion hybrid moment was soundtracked by Whitney Houston’s “I’m Every Woman” (which is a bit corny, I’ll admit) and featured some model heavy hitters like Gisele Bundchen, Cara Delevingne (and her amazing eyebrows), and Kendall Jenner (yes, THAT Kendall Jenner).

And while the debates have already started over whether of not Karl Lagerfeld is appropriating feminism in order to sell some of the best couture clothing money can buy — proving that we still believe in feminist essentialism and haven’t accepted that sometimes feminists do anti-feminist things and people who aren’t feminists can participate in feminism as well — only one word comes to mind when I review the images from the show: cute. No, it’s not cutting edge, transformative, or the catalyst to take feminism to new heights. Nor is it harmful, reductive, trivial or a threat to current movements against sexism. Every reference to feminism doesn’t have to fit the “trash or keep” binary. Feminism obviously translates differently across disciplines, borders, genres, markets, and industries. Within its context–which was an artistic display of next season’s clothing to close out Chanel’s show–the fuax rally was creative, fun, and thoughtful.

And as a remembrance of Coco Chanel, founder of the fashion powerhouse, it was also appropriate. On her journey to be a fashion legend, she pushed back on some of the restrictive, gendered fashion norms of the 20th century, started her business with sex workers as her first clients, and maintained a rebellious determination for personal independence. Her innovative and timeless ideas completely changed the way France saw the female form and the role of women in the fashion industry. The line has been known for its practical designs inspired and made for working (and obviously highly compensated) women. While I’m unsure if she ever named herself a feminist, she definitely engaged in a feminist practice through her work and life. Check out this short story of Coco Chanel’s inspiring life.

Sesali tried to give herself a nickname like Coco Chanel did when she was 12. “LiLi” didn’t stick.