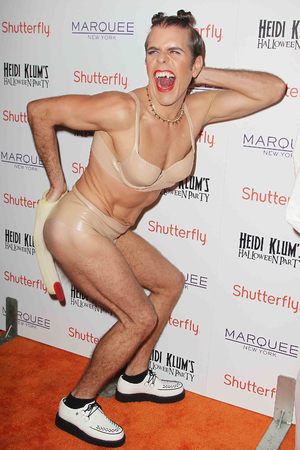 Perez Hilton showed his ass yesterday, in addition to the white male privilege that allows so many gay men like him to adopt caricatures of black women for their gender and sexuality performance. ​The king of internet shade and slander tweeted: “Inside every gay man is a fierce black woman.”

You’d think that, by now, anyone with a Twitter account would have realized that you should keep black women out of your proverbial mouth unless you want your mentions to blow up like a celebrity sex tape (to put it in language that Perez gets). ​But obviously he missed that memo.

I won’t get into all the ways that this tweet was offensive. As was his refusal to apologize, instead suggesting that he was a victim of homophobia and melodrama. Twitter thoroughly handled that for me via #NotInsidePerez​.

I do think there is a historical context that informs why​ a specific kind of black womanhood is appropriate​d by some gay men​. For one, black womanhood is juxtaposed against white womanhood–which is considered the standard. White womanhood is read as pure, normative, ideal, socially acceptable, and neutral. Historically, black womanhood has been accepted as deviant​. This is all the more true if black women are loud, flamboyant, or “fierce.” Because queerness has also been seen as deviant, it makes sense that gay men would claim this model as a filter to express themselves. And, like Perez, I’m sure many gay men think this is a compliment to black women. As someone who is intentional about the work of celebrating black girlhood, I get how this could possibly, perhaps, maybe be homage and reverence of the very real expressions​ that black girls and women have created. However, I’ve been hit with enough overzealous “hey boo”s from gay men to know better.

​Simultaneously, another conversation about gay men ​was happening on Twitter via #notyoursassygayfriend, started by Christopher Carbone. This was a great conversation about homophobia, the silencing of the experiences of queer people of color, trans inclusivity, and why gay men shouldn’t rely on racist tropes for their own gender/sexuality expression.

I saw someone on Twitter suggest that #notyoursassygayfriend was started to divert attention away from Perez and the concerns of black women​ in this situation. To the contrary, I thought that​ the conversation emphasized the need to do away with the sassy gay friend trope–and the way that black woman caricatures have been used to inform the “sassy” in that equation. If there were more modes of expression available to gay men, then maybe Perez Hilton wouldn’t feel the need to define himself up against a racist trope. It’s easy to want to align with one of the few culturally accepted expressions of gayness, but not at the expense of others.

The truth is, using maleness, and in many cases whiteness, to stabilize and ​standardize a gender expression that has been demonized is not for the good of anyone. Yesterday I tweeted:

What @PerezHilton meant: Every gay man adopts a caricature of poor black women for their gender performance. Be grateful wit ya broke ass.

And it’s true. We shouldn’t need a white male body to​ legitimize our experiences or expression. We shouldn’t only be accepted when we exist “inside” someone else. So we’re not going to accept this as a compliment.