There are two things about me that continue to have a significant impact on my life: (1) I spend a LOT of time on the internet; and (2) I have spent a LOT of that time feeling down and out in the aftermath of traumatic episodes. As a result, I am confident that I have been on the receiving end of every shallow (yet probably well-intentioned), mostly-useless platitude that is supposed to provide some sort of groundbreaking guidance that will magically empower me to instantly pick up the pieces of my life. Over time my patience for these platitudes has shrunk significantly. Instead of being comforted by a friend’s/acquaintance’s/stranger’s words, I feel a flash of annoyance as I try debate in my head whether to engage with the other person on why what they said is just not true. And as I spent more time mulling over why I so passionately hated these tired cliches, I realized that it’s because many of them do not fall in line with my feminist values. In fact, many are not harmless advice given by a well-meaning person; they support maintaining a status quo where the abused are blamed and abusers somehow escape accountability for their actions.

One of my least favorite platitudes is one of the infinite versions of “You get what you put out.” Some versions include: “You reap what you sow” and “Everything that happens in your life, you attract.” So when I saw a friend as the recipient of such advice (and it was the ONLY comment on the status!), my frustration made me feel compelled to fire off a comment in protest. 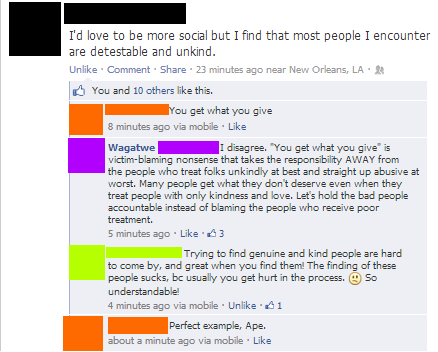 I am usually not one to engage in these sort of  threads on Facebook, but I had to step in. It triggered some of the main pet peeves that I have about victim-blaming  “advice.”  Here are some of them:

(1) It implies that my friend attracted these “detestable and unkind” people. If we truly do “get what we give” then this means my friend had been giving predominantly “unkind and detestable” vibes out into the universe. Therefore, it is her fault that most of the people she has encountered turned out that way. Considering how this person is 100 times kinder than me on my best day, I know that is absolutely false.

I remember when The Secret and the law of attraction became very popular and my mom bought not only the physical book, but the DVD and audiobook.  I didn’t pay much attention to it because my mom’s enthusiasm for it was a clear sign it wasn’t for me. When I finally took the time to learn what it was about, I was horrified.

Wow! I thought. And here I was thinking that institutional racism, patriarchy, white supremacy, rape culture, and normalization of abuse were just some of the forces behind the systemic abuse of and discrimination against marginalized people. Apparently it’s not oppression that’s the bad guy here; it’s the disproportionately negative thoughts of people of color, transfolk, women, poor people, etc. that makes people and institutions treat them like second-class citizens. I found that impossible to believe.

(2) It puts the onus on my friend–the receiver of the bad behavior–to stop running into unkind people rather than placing it on the people to stop being jerks. Look, I get it. There’s a certain type of empowerment that people can gain when we frame others’ actions towards us as (somehow) within our control. But unfortunately that is not the case. We have to remember that just as we have our own autonomy to make decisions about how we treat others, other people have that ability as well. While I am able to tell this person that what they’re doing is hurtful and/or take the proper actions to remove them from my life, it does not mean that I am responsible for the abuser’s actions.

(3) Rather than providing support or comfort for the person who is hurting, it just makes the person feel even worse. There are a number of reasons why people post on social media, which undoubtedly include a desire to reach out to a network and vent about something that is bothering them. Experts have said that the act of sharing a lot  can sometimes be attributed to a subconscious desire to control one’s own anxiety. I don’t know about you but if I am basically told that it’s my fault that I have met so many crappy people in the world, my anxiety would not improve.

I remember years ago when I shared on a forum I frequented that I had been recently raped. While I got some messages of support, one of the first reactions was from someone who had to question why didn’t I stop it. Why didn’t you protect yourself? Why did you put yourself in that position in the first place? Already exhausted from having multiple job interviews hours after being raped, the humiliation I felt from words I read in a place that I thought was a safe space was too much. I left the forum and didn’t visit the site again for years.

This mindset–the need to jump to ask why the abused “allowed” it to happen rather than ask why the abuser committed the act–is enabled by the prevalence of self-help philosophy like the law of attraction. This dangerous logic emboldens abusers to continue, unchecked, harming an increasing number of people, because when they blame their underage rape victims the judge agrees. It leads to young teenage women in New Zealand who become survivors of abuse blaming themselves and not tell anyone or seeking help. It lets a mainstream, reputable newspaper run a piece calling a 11-year-old gang rape victim a seductive “spider.” After all, if a perfect, abuse-free life is just a stream of positive thoughts away, then clearly the victim did not think or act perfect enough to remain unharmed.

Wagatwe is tired of all the victim-blaming bullshit.