Ed. note: This post is part of the second round of the Feministing “So You Think You Can Blog” contributor contest (background here). Stay tuned all week as our six finalists take turns turns covering the blog and giving us a sense of their personal contributor style. The winner of the contest and newest member of the Feministing team will be announced next week!

I share this story to illustrate how Boston Feminists for Liberation, who organized this march, moved us through the constructed landscape of the city to engage tangibly with intersectionality and to approach the challenge of dismantling rape culture from several different vantage points, literally.

Starting place: The Boston Common. One of the organizers introduced the march. She stressed movement-building without using “the word that may empower some while disempowering others.” Then a survivor spoke out: “I am not ashamed to say that I was sexually assaulted.” 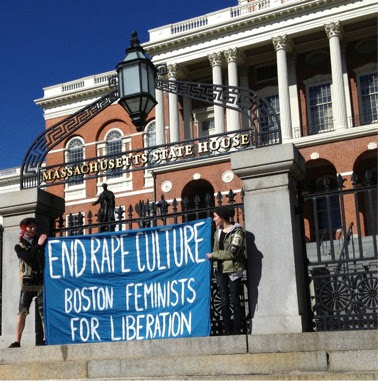 On the gate: Massachusetts State House. On the poster: End Rape Culture/ Boston Feminists for Liberation.

First stop: The Massachusetts Statehouse. Pointing down the street, one woman recalled, “I came here 40 years ago to get underground referral to abortion services before the US allowed legal abortions.” Shifting topics, she spoke about violence and rape in prisons and urged us to find ways to fight sexual violence without building up the prison system.

Second stop: Outside of a well-hidden crisis pregnancy center. Massachusetts has three times as many such centers as it does clinics that provide the full range of reproductive health services. These centers use lies and manipulative tactics to scare women away from contraception and abortion. This systematic manipulation, shaming, and blaming of women is part of the same system we call rape culture. 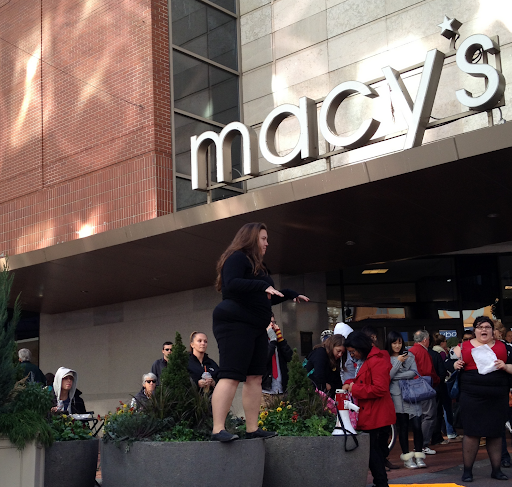 Third stop: The big Macy’s at Downtown Crossing. Two women spoke out against fat-phobia and their experiences of shame, degradation, and abuse from individuals and institutions. Companies “make billions of dollars off shaming women’s bodies.” Women are literally told not to take up space. And so, daring to take up space, daring to survive brutality, daring to be strong, is resistance and rebellion embodied.

Fourth stop: The financial district. A speaker called for economic justice, valuing the labor of raising children, and looking directly at racial disparities. Equal pay for equal work. Paid parental leave. Paid sick leave. Jobs. Housing. Health care. We need all of these things in order to have autonomy, equality, respect, happiness. We ALL need all of these things. This movement to end rape culture, this movement for reproductive justice, this movement for our bodies must also be a movement for our homes, our jobs, our children, our paychecks. 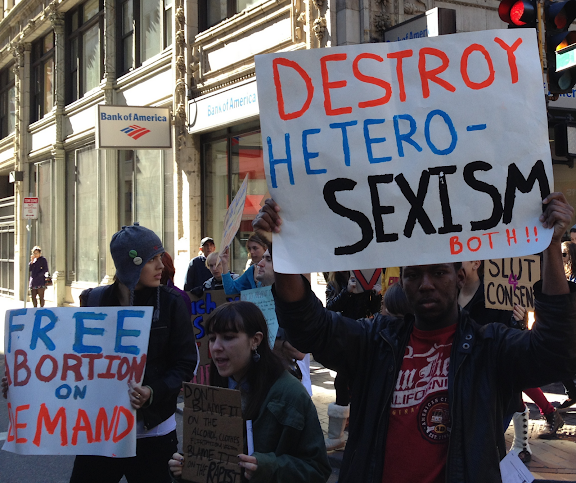 Last stop: Dewey Square, former home of Occupy Boston. Open mic time. Twelve people stepped up to speak. The first three were people of color. Before this, all of the speakers looked white and had not addressed racial injustice directly. The first speaker asked us to stop the use of the word “minority.” She finds it insulting, dehumanizing. A high school student told of street harassment. Others shared personal stories and expressed their anger.

We gathered in groups to debrief and talk about ideas for moving forward: more of this conversation about intersectionality, more voices for people of color, more communication, more connection, more outreach. And, next year, maybe a shorter name for the march.

I found myself left with one thought on repeat: Why weren’t more people here? I know hundreds of people in this city who want to dismantle rape culture. Maybe it’s something about marches—why don’t more people come to marches? Maybe the task feels too big. Maybe they’re already so engaged. Or maybe it’s because spending several hours on a Saturday afternoon at a march like this one may feel exciting and empowering and is also totally scary and draining and exhausting. I don’t know. But I wonder what that means about how we build a movement together.

Shout-out to the organizers, the speakers, the sign makers, and all who joined together to weave through the streets of Boston and proclaim how our city physically, institutionally, and systemically upholds rape culture and hurts us all. 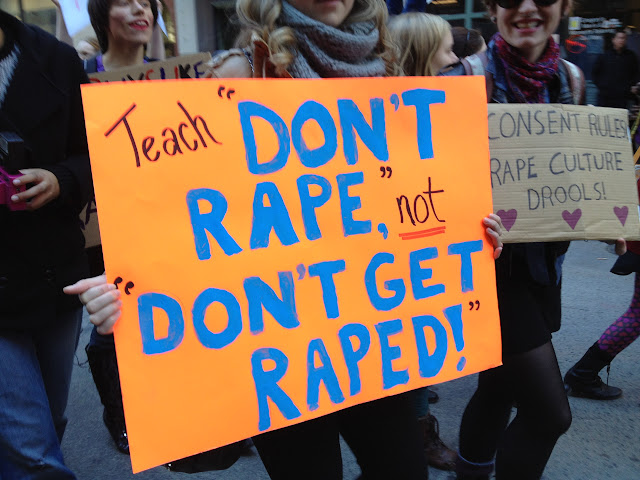 Mimi Arbeit is a PhD Candidate in Child Study and Human Development, with a focus on adolescent sexuality and sexual health (read more in her Academic Feminist interview). She is a freelance sexuality educator and also works locally to promote and strengthen sexuality education in public schools. She writes & curates The Debrief, a sex, dating, and relationships column published every Wednesday: http://www.jewishboston.com/users/Mimi-Arbeit. She also posts personal writing and academic work at sexedtransforms.blogspot.com. She tweets @mimiarbeit.