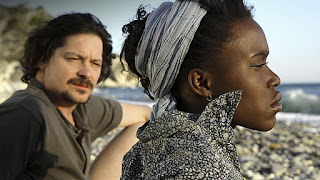 The 2011 Austrian film Black Brown White covers a topical issue that has been prominent in German-language cinema the past few years, human trafficking. Director Erwin Wagenhofer is the latest to contribute to a chorus of cinematic reformers who are heavily critical of xenophobic attitudes. The main character, the truck driver Peter (Fritz Karl), hauls garlic and tomatoes, but also undocumented workers. The profit is high, but so are the risks.

A Ghanaian woman named Jackie (Clare-Hope Ashite) throws a spanner into his coordinated plans. She refuses to take a place in the back of the packed, but air-conditioned trailer with the others. With her young son in tow, she defiantly takes a place in the cab at the front, next to Peter. This act is verboten for a reason; it only increases the risks involved in an already risky enterprise. Still, the trucker grudgingly admires her persistence and allows the two of them to stay.

A picturesque journey through back roads and deliberate diversions ensues. Evading the police is almost a skill in and of itself. Jackie and her son present frequent challenges by their very visibility. Showing a surprising sensitive side, Peter violates his good judgment by not keeping constant control and surveillance over the two of them. Other men involved in the process of smuggling assume that the Ghanaian is his lover, and the child his own. Why would he be so uncharacteristically soft and incautious otherwise?

Halfway through the film we, the audience, learn that Peter has become a trafficker of humans because of financial necessity. Bad economic times created the need for additional income, but his feelings towards the practice are mixed. The financial reward is lucrative, but the process from start to finish is involved. One never gets the opportunity to relax for even a moment. Danger is openly courted, fate is constantly tempted. He must find a way to never become caught in a lie. In a quiet moment one night, Peter concedes that this haul will be his last.

A main underlying theme in Black Brown White is racism and racist beliefs. Countries in Western Europe are often hostile, even to legal immigration. To cite one example, the immigration policy of the Swiss has long been time-consuming and difficult. Many Swiss don’t want to live with people who look differently than their people have always looked, or talk differently than they have always talked. Or, in other words, they do not wish to compromise cultural purity. The global economic crisis only makes these feelings worse. People now believe that illegal immigrants are taking money out of their own pockets, not just polluting the gene pool.

The widespread belief in ideas like these does not stop with German-speaking peoples. It is especially true in France. Hypocrisy is rampant and virulent, especially because countries who routinely lambaste American racism take part in it themselves, in their own way. Unlike the United States, Western Europe was never founded on an idealistic premise that one ought to take in the refugees of the world. The nation/states of the Old World have, in effect, put up fences much higher and longer than ever proposed by American politicians. A fear of ethnic corruption regrettably exists in the minds of millions.

Black Brown White shows that at least some can see beyond the fear and suspicion. As Americans, it may do us good to recognize that racism and ideas of cultural acceptability do not end and begin with us. Our problems may have been magnified with time alongside our predominant size and influence throughout the world community. And along the way, a few basic lessons can be learned that are true regardless of one’s country of origin. Life can be rewarding, but it is rarely easy for any of us. People are pretty much the same everywhere, often when it comes to conquering adversity. Every place has its strengths and also its weaknesses.