More than 130 U.S military women have died in Afghanistan and Iraq. Of the 130 deaths, 50 of them the Department of Defense has classified as noncombat related. From those at least 20 of the noncombat deaths are considered suspicious involving the mysterious deaths of servicewomen after reporting a sexual assault or rape. Many more service women that reported a sexual assault died serving stateside or after leaving the service. On this Memorial Day and Military Sexual Trauma awareness day let take a moment to remember and honor our service members that lost their lives due to Military Sexual Trauma.

One such death is that of Tina Priest , a 20 years old Army Private First Class who was found dead by a gunshot just days after reporting a rape by a fellow soldier. Nobody was charged with her murder or rape. 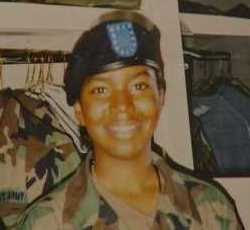 Lavena Johnson, a 19 years old Army Private First Class who was found dead from a gunshot wound in Iraq. According to the autopsy report and photographs  Lavena Johnson had a broken nose, black eye, loose teeth, burns from a corrosive chemical on her genitals. The Army ruled her death a suicide.

Keisha Morgan, a 25 years old Army Specialist was found dead in Iraq shortly after reporting a fellow soldier had slipped something in her drink and possibly raped her. The Army refused to separate the alleged perpetrator and the victim. The Army ruled her death a suicide. Lance Corporal Maria Lauterbach was 20 years old when she was raped which resulted in a pregnancy. When Lance Corporal Lauterbach was 8 months pregnant she was missing from her base at Camp Lejeune, North Carolina. The Marine Corps forced Maria to work on the same base as her alleged perpetrator. After a delayed response from the Marine Corps, they found the dead body of Maria Lauterbach and her unborn child buried in the backyard of Cesar Laurean, the fellow Marine that she accused of rape.  During the murder trial, the Marine Corps continued with the blame-the-victim response and accused the late Maria Lauterbach of having “lied to get out of trouble and was known for making up fantasies.”

Carri Leigh Goodwin a Marine Corps veteran found the victim-blaming from the Marine Corps and losing her job as a result of reporting a sexual assault too much to handle. Just days after returning to her home in Ohio, Carri drank herself to death. Carri had an alcohol blood content of .46, six time the legal limit. In combination with medication given to her by the Marine Corps, including zoloft it stopped the alcohol from going through her liver and went straight to her blood. The Marine Corps denied that she was raped.