So I’m still reading Seizing Our Bodies: The Politics of Women’s Health, which I first blogged about here. The book is an anthology of essays written about women’s health issues, published in 1977. The latest essay is “The Epidemic in Unnecessary Hysterectomy,” written by Deborah Larned. This essay was originally published in the New Times Magazine in 1974 under the title, “The Greening of the Womb.”

Let’s start out with a definition of “hysterectomy.” According to the Mayo Clinic’s website, a hysterectomy “is a surgical procedure that removes your uterus through an incision in your lower abdomen.” The page also explains how hysterectomies can be performed “through an incision in the vagina (vaginal hysterectomy) or by a laparoscopic or robotic surgical approach — which uses laparoscopic instruments passed through small abdominal incisions.” Okay, that seems pretty straight forward. 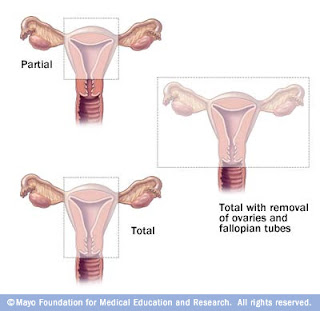 Deborah Larned asserts in her essay that in the mid-seventies, hysterectomies are “in fact the fourth most commonly performed operation in the United States today – after tonsillectomy, hernia repair and removal of the gall bladder” (196). Hysterectomies are an old and time honored surgical practice. Back in the 1800’s, hysterectomies were performed as a treatment for female hysteria. Hysteria was a diagnosis commonly given to women who were too loud, too quiet, too sexual, not sexual enough, ate too much, ate too little, too smart, too dumb, too tall, too short, and, in general, did not fit the mold for the “perfect woman.” So hysterectomies have been around for a long time, and have not always been performed for the best reasons.

In 2008, CNN.com ran a health article than bluntly stated, “More than two-thirds of the 600,000 hysterectomies performed every year may be unnecessary.” The article is a little vague, though, and only quotes “experts.” A Time health article published in 2007 is a lot more specific. According to their information, “10% of patients who undergo hysterectomy do so to treat cancer of the ovaries, uterus or cervix.” They go on to explain that with cancer, most doctors agree that a total hysterectomy is necessary and life-saving. However, there is still 90% of hysterectomy patients to be accounted for. What about them? 35% to remove uterine fibroids (benign tumors), 30% to do away with heavy menstrual bleeding, and the other 25% for a variety of reasons including endometriosis and pelvic pain.

So let’s take this one diagnosis at a time. Fibroids, for example, are tumors that crop up inside your uterus. Which sounds scary, but according to the Time article, the chances of the benign tumor turning malignant is rare. Like, extremely rare, as in only 1 in 1,000 women develop cancer from fibroids. Not to diminish the experiences of women who do develop cancer, but is a 0.1% chance of cancer enough of a chance to just scoop out a whole mess of organs? No, according to Dr. William Parker, “chair of the obstetrics and gynecology department at Saint John’s Hospital and Health Center in Santa Monica, Calif., and author of A Gynecologist’s Second Opinion.” According to Dr. Parker, there are a host of options to treating fibroids, including laparoscopic myomectomy, which removes the fibroids through the abdominal wall, or fibroid embolization, a procedure performed by a radiologist, which involves “injecting tiny polyvinyl alcohol particles…into the uterine arteries.” This prohibits blood flow to the uterus and thus keeps the fibroids from growing.

Fact is, there are non-surgical and non-uterus-removing treatments for every justification of hysterectomy except straight up cancer. So why are hysterectomies still being performed at such a voracious rate? If you guessed “money,” you would sadly be right. Insurance companies still pay out more for a hysterectomy than they will for any other operation that could preserve the uterus or ovaries. As some would say, the law has yet to catch up with technology, and insurance companies have yet to catch up with modern health care.

Women’s bodies are often seen as expendable, and that extends to women’s organs. Larnad allows a Dr. Ralph C. Wright to demonstrate just how useless doctors thought women’s bodies were:

When the patient has completed her family, total hysterectomy should also be performed as a prophylactic procedure. Under these circumstances, the uterus becomes a useless, bleeding, symptom-producing, potentially cancer-bearing organ and therefore should be removed…To sterilize a woman [through tubal ligation] and allow her to keep a useless and potentially lethal organ is incompatible with modern gynecological concepts. (199-200)

So there you have it. Thankfully, Dr. Wright’s theory did not last into the 21st century. Sterilization by hysterectomy is, for all intents and purposes, illegal. According to the Code of Federal Regulations for Public Health, “Programs or projects to which this subpart applies shall not perform or arrange for the performance of any hysterectomy solely for the purpose of rendering an individual permanently incapable of reproducing.” (emphasis mine.) That doesn’t mean it still doesn’t happen – I’m sure it does. Doctors have been taking liberties with women’s bodies for far too long to stop because of some pesky law. In fact, it seems to happen enough that when I Googled “unnecessary hysterectomy,” I found two websites for two different law firms dedicated solely to filing malpractice suits in the event of unnecessary hysterectomy.

So while it seems that doctors aren’t performing hysterectomies today for the purpose of sterilization (at least not openly) they are performing them for a variety of other reasons that still aren’t necessary. It seems as though unless a uterus is in active employment, it has no purpose other than to inconvenience women and piss off doctors. But do we remove the eyeballs of a blind person, or cut off the breasts of a woman who is not breastfeeding? Do we remove the prostate of a man over 50 because he might get prostate cancer? Of course not. Just like a limb is not amputated if paralyzed, a uterus should not be removed just because a baby is not currently baking inside of it. Women – and that includes women’s bodies – have uses that far extend that of their reproductive abilities. Hysterectomies, like childbirth, are another example of the medical industry in the US unable to advance when it comes to women’s health and women’s bodies.

My name is Marilyn, I'm 25, and I'm about halfway through finishing my bachelor's degree. I live in the Pacific Northwest, in the US, and I want to go to nursing school and join the Peace Corps, not necessarily in that order.