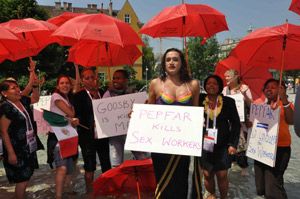 Photo Courtesy of the Global Network of Sex Work Projects

As you all may know (because we like to talk your ear off about it here on Feministing), the United States currently endorses an explicitly discriminatory policy against sex workers, via PEPFAR, our international HIV/AIDS aid policy that contains an anti-prostitution pledge requirement. This requirement states that no funds “may be used to provide assistance to any group or organization that does not have a policy explicitly opposing prostitution and sex trafficking” which basically means that life-saving materials like condoms, contraceptives, and even information about sex and sexuality can’t legally be distributed to sex workers by any international agencies that accept US funding (domestic agencies have to make no such pledge, although prostitution is obviously not legal in most of the US).

But you’re not the only one who thinks so. Last week, policymakers, diplomats, activists, members of the media, and many more gathered in Vienna for the 2010 International AIDS Conference, and activists were there, protesting this dangerous and unjust policy in a way that the most high-ranking diplomats and representatives could NOT ignore.

More after the jump.

As reported and organized in part by the Global Network of Sex Work Projects, last week’s conference saw the largest delegation of sex workers ever in attendance. While members of this delegation participated in a wide range of activities, one of the most powerful was a lively and loud demonstration against the anti-prostitution pledge during a speech by United States Global AIDS Coordinator Dr. Eric Goosby.

From the press release and blog of the Global Network of Sex Work Projects:

The blog of the Global Network of Sex Work Projects features several testimonies really get at the significance of such a strong visible display against the harmful policy:

”Penninah Mwangi from the Bar Hostess Program in Kenya (www.bhesp.org) and the African Sex Workers Alliance (ASWA) was denied funding for HIV prevention and care because the organisation refused to sign. “PEPFAR discriminates against sex workers and prevents us from organizing our communities for the prevention and treatment of HIV,” said Mwangi. “The people making these decisions know nothing about the realities of sex workers in Kenya, yet they make decisions about our lives.”

I also really loved this testimony from Cheryl Overs, an activist affiliated with the Paulo Longo Research Institute, Asia and the Pacific Region:

“On Tuesday, July 20 sex workers’ rights activists marched through the IAC conference centre to protest the PEPFAR Anti Prostitution Pledge at a session at which was to be a presenter. Eric Goosby cancelled his speech to avoid the sex workers and instead held a press conference in the media centre. Sex worker activists followed him there, where we loudly accused him of murdering sex workers and preventing the crucial funding for sex workers. Everyone was upset and challenging him to be responsible and support human rights for all. I sat on the table with my red umbrella and screamed that he was a murderer, and everyone was chanting “SHAME SHAME SHAME!!!!” He tried to escape and fell from his chair, and then he was helped to his feet by security and escorted out. The media stayed in the room and sex workers were venting their issues of concern. For example, in Uganda the only funding is for rehabilitation and there is NO money for condoms. In Kenya there is no funding for necessary sex worker support services, only rehabilitation. All who receive money from USAID’s PEPFAR fund have to sign an anti-prostitution loyalty oath. We left chanting, “sex workers united will never be defeated!!! PEPFAR kills sex workers!!!”

I support the efforts of these brave activists and would like to add my voice to the growing chorus of those internationally outraged by the senseless discrimination inherent to the US anti-prostitution pledge.