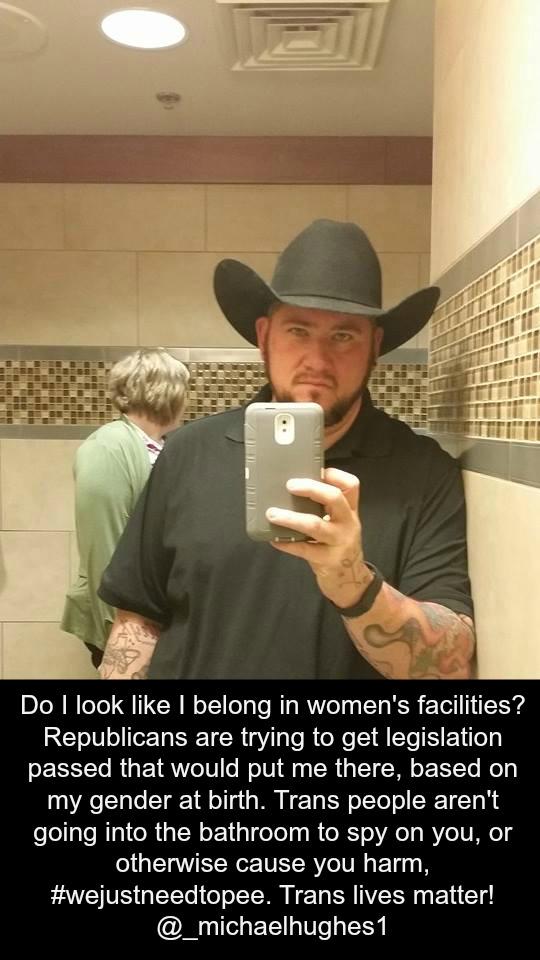 Florida and Texas are proposing bills to preclude transgender people from entering restrooms that match their gender identity. Kentucky’s drawing up a similar bill that would apply to school facilities. And Minnesota’s GOP leaders want to undo the transgender-friendly policy approved by the Minnesota State High School League, which allowed male-to-female transgender students to play on girls’ athletic teams (girls are already permitted by state law to play on boys’ sports teams). The Minnesota legislation would also force transgender students to use only those locker rooms and bathrooms that correspond to their gender at birth.

The reason for infringing upon transgender rights? To “protect” women.

Republicans say that the new laws would safeguard women from sexual harassment and assault in public facilities. As Rep. Frank Artiles of Florida explained it, “A man such as myself can walk into the bathroom at LA Fitness while women are taking showers, changing, and simply walk in there. If I feel like a woman that day, I can be allowed to be in that locker room.” Lawmaker Debbie Riddle of Texas chimed in to say that the legislation would protect women from “finding a man [in a restroom] who feels like he is a woman that day.”

First of all, being transgender is not “feeling” like you are a man or a woman one day. It is knowing that you were born in the wrong gender for your entire life.

Being transgender is not some kind of capricious whim that people use as an excuse to gain entrée into a woman’s restroom. It is a gender identity that is foundational to who someone is and how they understand themselves.

Moreover, whenever Republicans seem committed to protecting women’s rights, I’m always skeptical, given their track record of talking about “legitimate rape,” and, most recently, their refusal to grant abortion rights to survivors of sex trafficking.

First of all, the excuse of being a bigot to “protect women” is nothing new. Such idiotic rhetoric served to justify lynching and segregation for centuries in the post-Reconstruction era.

However, the protection of womanhood is never about protection for all women. While lynch mobs were burning black men in purported defense of white women, black women were being raped, sexually assaulted, and psychologically abused by white men with virtual impunity.

Similarly, Texas’ and Florida’s legislation is about protection for cisgender women, effectively excluding transgender women from the discourse on bodily safety.

Yet, transgender bodies are some of the most vulnerable to sexual assault. In fact, 1 in 2 transgender people will experience sexual violence at some point during their lives. I’m not saying these anti-transgender laws are the same as lynch mobs; rather, I’m saying they are part of a historical pattern of using the protection of some women as justification for the subordination of marginalized populations.

The “protection of womanhood” has been the specter behind innumerable acts of violence. But it remains a specter — an artificial objective used to subjugate oppressed identities.

Women (both cis and trans) never have been and never will be protected by anti-transgender laws any more than they have been protected by lynching or other acts of hegemonic aggression.

Such talk about keeping women safe is just that — hollow talk based in sexist assumptions.

Let’s recognize anti-transgender legislation for what it really is: a thinly veiled attempt to forcibly impose a gender binary, marginalize gender nonconforming folks, and maintain an oppressive status quo.