Lebron James’ mother is dating a rapper who is only three years older than him, and who likes to publicly express admiration for the two-time NBA champion. This apparently threatens the collective ego of basketball fans around the country.

Since the Internet uncovered this guy, fans and haters have gleefully pointed to comments on the rapper’s Instagram account big-upping Lebron, calling him a “role model” before declaring that “life is about being positive”. They openly mock photos where he displays LeBron’s championship ring and models it for the camera (Deadspin helpfully points out that he “has to use two fingers” because the ring is too big on him).

I wrote about Lebron, family honor and yo mama stigma frameworks back in July 2010, when Lebron had recently announced that he would be leaving the Cleveland Cavaliers to play for the Miami Heat, after much hype, speculation, and that infamous hour-long ESPN special. In my piece, I wrote that the critical backlash against Lebron shouldn’t involve slut-shaming of his mother based on rumors that she slept with Delonte West, another player on the Cleveland Cavaliers. The rumors had inspired such jabs as the shirt pictured (“You can head south but your mom is riding west”) as well as countless sites, articles, and street corner conversations. I’m disappointed but not surprised to see the “yo mama” trope, common in hip hop culture, continue in the realm of professional sports and especially against a woman who has given so much for her son’s success, raising him on her own as a 16-year-old single mother, Gloria Marie James, struggling to find steady work to support him before allowing him to move in with the family of a local youth football coach, who introduced LeBron to basketball and helped him become the superstar he is today. 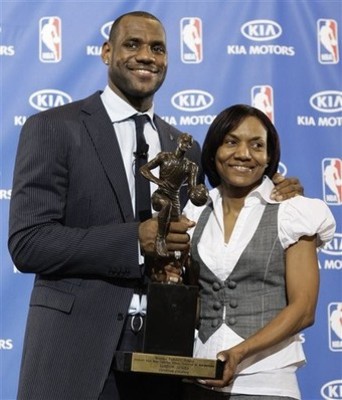 It seems to me like we should all be so lucky as to have our parents find loving relationships at any age. Regardless of your opinions about Lambo as a partner, can we all agree that policing adult women’s romantic relationships and sex lives to shame members of their family is a malicious type of slut-shaming, one that contributes to anti-feminism and can have sinister consequences. In the past, I’ve linked this concept of female sexual behavior as bringing honor or shame upon her family to all kinds of messed up paradigms and behaviors including, at the most extreme end of the spectrum, honor killings.

When we do things that enable members of society to feel entitled to control other people’s bodies, often women’s, we all get hurt. We get hurt when someone’s name is gleefully dragged around in the mud to shame, embarrass, and dishonor their family, and a young person silently observes and thinks, “that could be me.” We get hurt when we’re told that our relationship status is something that can be used as a weapon against those we love. Sexual decisions should be our own to make, not criteria by which to measure the “honor” of our family and the ability of the men in our lives to maintain control over our body, our actions, and our sexual autonomy.