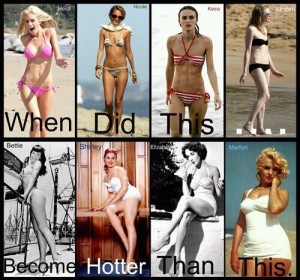 The other day, my friend shared this image on my Facebook wall. I’m sure she had good intentions, as did the creator. At first glance, it seems like a girl-power-feel-good-kind-of-message that challenges the pressure to be thin, similar to the “real women have curves” mantra made popular by the movie of the same name. It seems to be about women celebrating their curves, accepting their bodies, and not buying into the extreme dieting mentality.

But it’s not. This image is about shaming thin women about their bodies under the guise of empowering heavier women. It’s just the other side of the same coin.

What about women who are naturally thin? Or naturally not as curvy? Are they less hot? Are they not real women? Comparing is just one more way for us to separate ourselves.

Most of us struggle with our weight, so being in the public eye would most assuredly have an impact on how celebrities feel about their own bodies. Heidi Montag had 10 plastic surgeries so that she could look hot enough. Tabloid rumors have accused Nichole Ritchie and Keira Knightley of having eating disorders, and Kirsten Dunst was on the cover of Star Magazine for having one of the “worst beach bodies,” so it’s not as if any of them are being celebrated for their bodies at the moment. The media’s pretty arbitrary anyway about what constitutes the hot-kind-of-thin vs. the anorexic-kind-of-thin. It’s a fine line, and those celebrities who cross it are publicly shamed on tabloid covers.

Beauty is subjective. Others’ opinions about us are irrelevant — what matters most is how we see ourselves.

The body snarking, the gossipy headlines about who has anorexia or who’s getting fat, the who’s hotter comparisons — these all promote the age-old competition to determine the fairest of them all. And eating disorders are part of this futile attempt to fit what society deems “hot”.

There’s value in simply being who we are, whether we’re thin or fat or have curves or not. So, in response to the question: “When did this become hotter than this?”, here’s another question: Why do we have to cut someone else down to feel better about ourselves?